Jesus had been back to Capernaum for some days, and the news of this became known. Many people gathered at the house to hear Him speak, and the crowd had really grown. In fact, there were so many who wanted to come inside that you couldn’t get near the door. But there was a paralytic, with four friends who had a goal–to hear Jesus say, “Restore!”

So fervent were they in their earnest goal, that though it didn’t seem possible to get through, they weren’t downcast, but instead looked up–gaining entrance through the roof was what they’d do. Their faith in the Lord, their tenacity to attain, moved them to hoist their friend and his pallet up. They made a rooftop hole and let him down to the Lord–it didn’t matter to them to interrupt.

Jesus, seeing their faith, immediately was moved. “Son, your sins are forgiven,” He then said. This prompted thoughts in some scribes who were there, that He was blasphemous and clearly misled. Jesus knew in His spirit the things they were reasoning and confronted them before they could talk. He asked which was easier to say, “Your sins are forgiven,” or “Get up, and pick up your pallet and walk”?

But so that they would know He really did have this authority, He further went on to say–that the man who’d been paralyzed should get up and take his pallet and be free to go on his way. Immediately, the man arose and picked up his pallet and walked out in the sight of all who were there. The people were amazed and glorified God, saying they’d never seen anything like this anywhere.

After that, Jesus went out to the shore of the sea, which can bring to mind the “waves” of God’s grace. The people followed Jesus to the shore, as well, and He continued to teach them at that place. A fitting scene it was to conclude this narrative, for God’s grace does come in wave upon wave. If a problem seems insurmountable, look up, not down–He’ll help you, just be bold and be brave.

“Jesus Christ is the same yesterday, today, and forever.” Hebrews 13:8

“Why are you cast down, O my soul?
And why are you disquieted within me?
Hope in God;
For I shall yet praise Him,
The help of my countenance and my God.”
Psalm 43:5

“And with great power the apostles gave witness to the resurrection of the Lord Jesus. And great grace was upon them all.” Acts 4:33 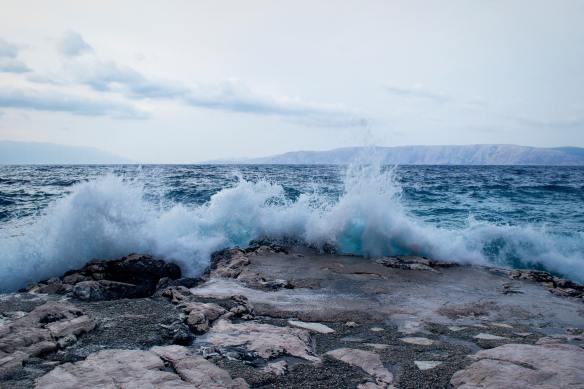