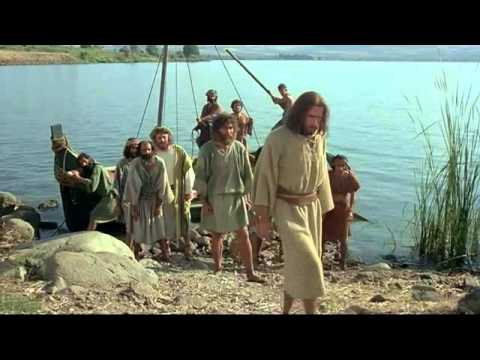 Photo from the movie, “Jesus”

At evening, Jesus and His disciples were headed to the Gadarenes, across the sea. A storm arose and began to fill the boat with the wind-whipped waters of the Galilee.

Jesus was asleep in the stern in the midst of it all when His disciples cried out with fear. “Teacher, don’t you care that we are perishing?”—their lack of faith being made clear.

Jesus stood up and rebuked the wind and spoke to the sea, saying, “Peace, be still!” Then the disciples were amazed to see the wind and the waves conform to His will.

After the Lord questioned them why it was that they had no faith, they wondered aloud together. “Who could this be?” to have such authority over the power of wind, sea, and weather.

At their arrival at the Gadarenes, they would see the Lord do a work of another kind. There, Jesus was met immediately by a man who had an unclean spirit and whom no man could bind.

He stayed among the tombs and mountains and would cut himself with stones, crying out both day and night. Even shackles and chains couldn’t hold him, but he’d break them, due to an evil, inner might.

Seeing Jesus from afar, this man ran to Him and worshiped Him, and then he said… “What have I to do with You, Jesus, Son of the Most High God?” He indicated fear of what was ahead.

Jesus told the unclean spirit to come out of the man and asked its name, which was Legion. “For we are many,” it said, and begged Jesus earnestly not to send them out of that region.

Then all the demons begged Jesus to permit them to enter a herd of about two thousand swine, which were feeding in the mountains there. At once, Jesus gave permission. The demons entered the pigs, which then ran violently down a steep place to drown in the sea, giving those who saw it a troubling scare.

The men who had fed the swine fled and told others in the city and country what had transpired. So, many came to see for themselves and were shocked to find, clothed and in his right mind, the madman whose life had been so degraded and mired.

Afraid, they pleaded with Jesus to depart from there, even though such a great deliverance had been shown. The man who’d been delivered very much wanted to leave with and follow Him, but Jesus said that, instead, his story should become more known.

He told him to go home and tell his friends of God’s compassion on him and what great things the Lord had done… So he departed and began to share in Decapolis, and the people marveled as he spoke about his life-changing encounter with Jesus, God’s Son.

Thanking God that today, also, we hear of and have ourselves experienced
God’s love and power through faith in Jesus. Find encouragement by reading some of the praise reports at http://www.josephprince.org