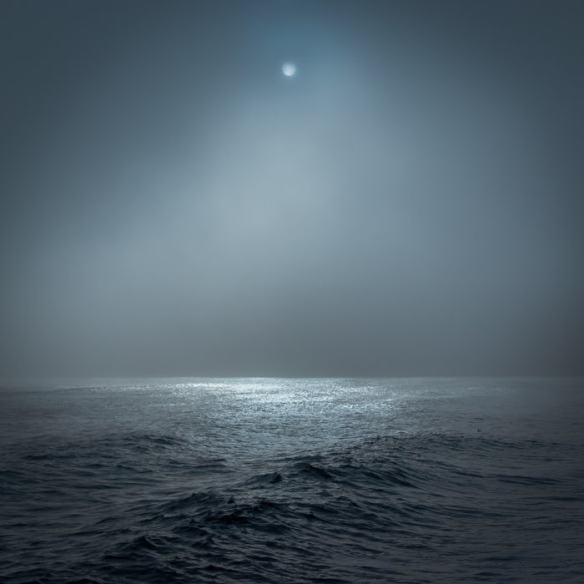 “On the same day, when evening had come, He said to them, ‘Let us cross over to the other side.’ Now when they had left the multitude, they took Him along in the boat as He was. And other little boats were also with Him. And a great windstorm arose, and the waves beat into the boat, so that it was already filling. But He was in the stern, asleep on a pillow. And they awoke Him and said to Him, ‘Teacher, do You not care that we are perishing?’ Then He arose and rebuked the wind, and said to the sea, ‘Peace, be still!’ And the wind ceased and there was a great calm. But He said to them, ‘Why are you so fearful? How is it that you have no faith?’ And they feared exceedingly, and said to one another, ‘Who can this be, that even the wind and the sea obey Him!’”
Mark 4:35-41 NKJV

Just as this night moon is full, as pictured here,
we’ve come to the end of 2018, the fullness of the year.

In the picture, the sea and the heavenly light
made me think of the time when Jesus ended the fright

of His disciples when a storm had overtaken their boat—
and “a great calm” came about, keeping them afloat.

In heading into the new year, with its uncharted waters,
remember the authority given to God’s sons and daughters.

With the Lord’s Word and the Holy Spirit, we have nothing to fear.
We, too, can speak to “the waters” throughout the coming year.

“Behold, I give you the authority to trample on serpents and scorpions, and over all the power of the enemy, and nothing shall by any means hurt you.”

“Commanding Power” Booklet
by Kenneth W. Hagin
at http://www.rhema.org
($1.95)
and other books on the believer’s authority

“Then Jesus spoke to them again, saying, ‘I am the light of the world. He who follows Me shall not walk in darkness, but have the light of life.’”
John 8:12 NKJV