I remember attending Billy Graham crusades when I was very young
and anticipating hearing Billy after George Beverly Shea had sung.

Cliff Barrows led the assembled choir in an always joyful way,
giving mighty praise to God before someone on stage would pray.

Then Billy would come forward; and with his powerful voice,
he’d say we needed to make a decision—God was giving us a choice.

He always pointed to the cross and what Jesus had achieved—
redemption through His shed blood on Calvary for anyone who believed.

He said we should repent of our sins and give our hearts to Christ—
that His was the only sacrifice which God says has sufficed.

He emphasized that “God loves you” and wants to be your friend,
counselor, and advocate—from beginning of life to its end.

He said this earth was not his home—that he was just passing through—
and that a home in heaven awaits every believer in Jesus Christ, too.

After many Biblical references, Billy would give an invitation.
Then, an amazing number in the place would come forward to his station.

As they came forward, a familiar song helped set so many hearts free—
“Just as I am, without one plea, but that Thy blood was shed for me.”

Today, Billy Graham is honored for faithful service to God during his life span.
May we continue to share the Gospel of Christ—God’s gracious redemptive plan.

“For God so loved the world that He gave His only begotten Son, that whoever believes in Him should not perish but have everlasting life.” John 3:16 NKJV 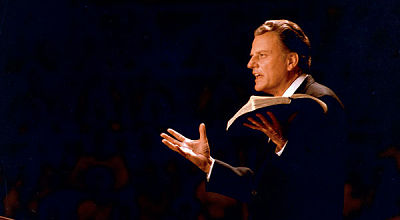