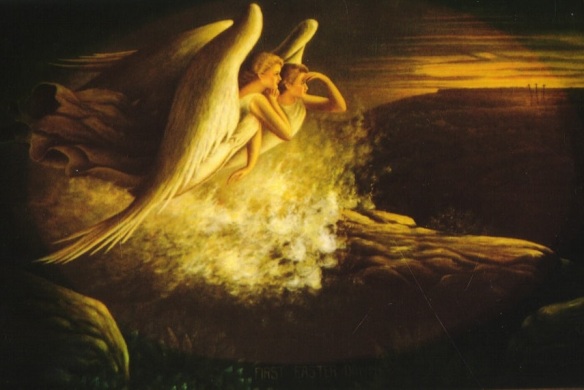 Jesus Christ of Nazareth had taken His destined place
On a cruel cross upon a hill–for the task He’d been born to face.
His sinless life had made Him the chosen Lamb of God–
Though now He sits at God’s right hand and bears a Shepherd’s rod.
Three days after Christ’s burial, and just at the brink of dawn,
Some, in love, had come to the tomb and had found that His body was gone.
But the pain of their grief concerning His death had then given way
To amazing angelic tidings on that glorious Resurrection day!
Jesus, the Man on the center cross, on the hill of crucifixion had been
The focus of God’s judgement upon all of mankind’s sin.
But now, with joy, the angels reminded that just as He had said,
Jesus, God’s Son, had risen in victory, up from the dead!
His Father’s gracious plan of redemption for all people had been met;
And, therefore, all of their sins, a holy God could now forget!
There’s just one requirement remaining; and it’s your choice–
To believe in your heart He’s Savior, and confess it with your voice.
Angels rejoice in heaven over one sinner who’ll repent,
And put their faith in Jesus Christ–the One Whom God has sent.

“…for all have sinned and fall short of the glory of God, being justified freely by His grace through the redemption that is in Christ Jesus….”  Romans 3:23-24

“For with the heart one believes unto righteousness, and with the mouth confession is made unto salvation.”  Romans 10:10

“In the same way, I tell you, there is joy in the presence of the angels of God over one sinner who repents.”  Luke 15:10 (NASB)

“Therefore, I will divide Him a portion with the great, and He shall divide the spoil with the strong, because He poured out His soul unto death, and He was numbered with the transgressors, and He bore the sin of many, and made intercession for the transgressors.”
Isaiah 53:12

Scriptures:  NKJV or as noted